Six months ago, I wrote about what I had learnt from Argentinians. After spending a year in Argentina, I have finally stopped eating dulce de leche every day, I use un par to describe large numbers that I am not sure of, and I am addicted to mate. Perfect. Yet, there are still parts of the language that make me curious. Here are some peculiarities of Argentinian language that you won’t find in other hispanophone countries. 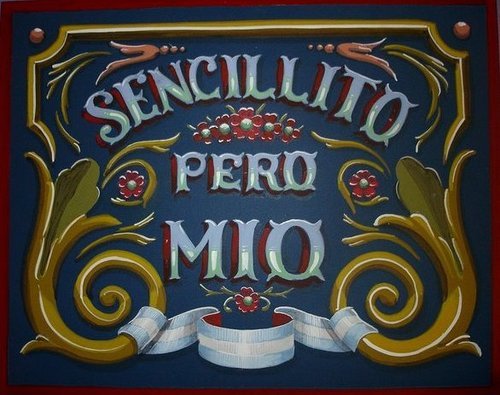 This took me a while to figure out. Someone told me that they hadn’t been able to use the internet because ‘se cortó la luz’. I spent a while thinking to myself ‘even if your light doesn’t work, you can still use your computer, right?’. After some confusion, I realised that it wasn’t just the light that wasn’t working, but all electricity.

This is a very short phrase that many Argentinians may not even realise they say, in which all the words may be combined into a quick ‘Ainomá‘. Generally, people have said it to me when they want me to, for example, stop pouring more beer into their glass. However, I have also heard it as a polite substitute for “Please, stop doing what you are doing, because I am going to do it”. I can think of many times that I have tried to do the washing up in someone’s house, and the reaction of the host has been a quick “ahí nomás”.

I learnt Spanish in Spain, where a pumpkin is a calabaza, and a courgette (U.S. zucchini) is calabacin. In Argentina there is a fantastic variety of vegetables in the pumpkin family, however, they all seem to be called zapallo. Maybe it will be big (grande), long (largo), round (redondito), or Italian (Italiano), but it’s always zapallo.

This is a fantastic expression which goes well with the personality of Argentina. People often say that Argentinians are big flirts, and so it makes sense that they have their own word for their actions – chamuyando. If a guy is always flirting, people will say he is a chamuyo. This term might also be used for someone who is very good at selling something.

One warm evening in December I started hearing the loud bang of sticks hitting metal. I went outside and walked to the Avenida Rivadavia, and saw thousands of people walking in the street in the direction of congress. My housemate told me that this was a huge cazerolazo. I immediately could see why it was called this, as everyone from young to old were bashing household pots and pans. If other places in the world do this, then I haven’t seen it yet!

In English, bad words are generally related to sexual acts or excrement. This is also true in Spain, however, in Argentina people feeling frustrated might talk about shells and parrots.

This point is not about verbal language, but body language. In many places in the world, I am not sure how to greet people. There is nothing more embarrassing than trying to give two cheek-kisses in a place where the people only give one, or none! One thing that I like about Buenos Aires is that everyone gives one kiss on the cheek, regardless of gender. Easy.

Are there any parts of Argentinian language that I’ve missed out? Let me know in the comments section below.