Gerunds are formed as a verb plus -ing. They look exactly the same as present participles, but they are not verbs! They are used as nouns.

I am swimming. (continuous verb)

Knowing when to use a gerund is one of the most complicated parts of English. Here we will try to make it a bit less complicated by naming all of the times that a gerund should be used. You should notice that we use gerunds when a verb is used in place of a noun. 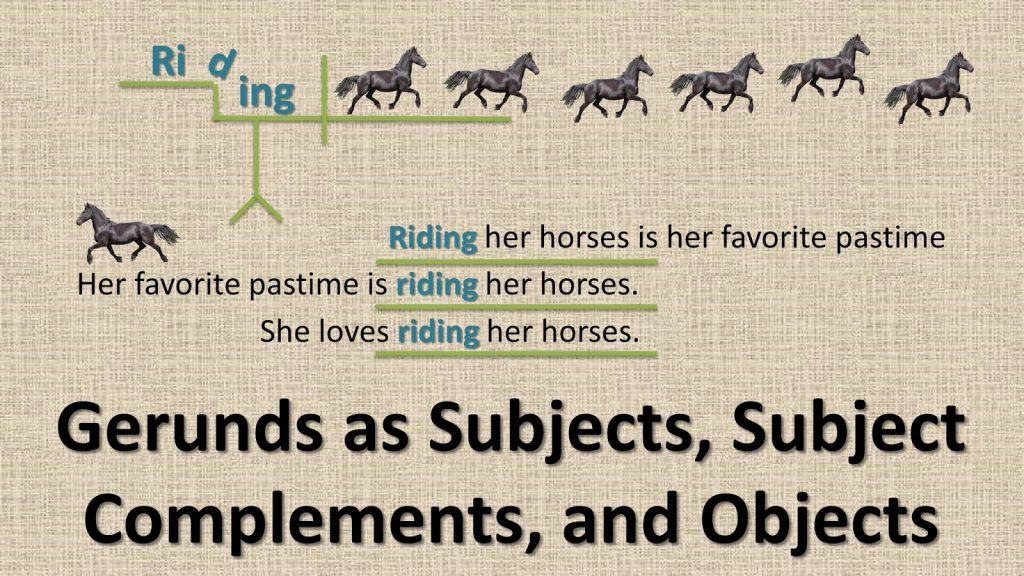 Test-yourself section at the end of article

(1) Subject (The main actor in a sentence)

Gerunds can be the subject of a sentence:

Eating vegetables is good for you.

If these sentences are reversed then ‘to eat’ and ‘to choose’ become objects, and so we do not use a gerund:

It is good for you to eat vegetables.

It takes time to choose the right colour.

(Note: Using the infinitive as a subject is not wrong, it is just less common, and often sounds more literary – “To be, or not to be? That is the question!”)

Prepositions are words like as, in, on, about, after, by or next to that show the relationship between one thing and another. After a preposition, a verb transforms into a gerund:

Mary is scared of flying.

I look forward to seeing you next week.

Unfortunately, the previous two examples (using gerund as a subject, and after a preposition) are the only concrete examples of when to use a gerund.

The other major use of gerunds is after a verb, however, it is only sometimes true. There are other verbs that must be followed by an infinitive and there are others where you can use either a gerund or an infinitive:

I recommend going to the museum. (must be gerund after ‘recommend’)

I want to go to the museum. (must be infinitive after ‘want’)

I like to go to museums. (either gerund or infinitive)

Gerunds are often used when actions are real, fixed, or completed. “I enjoy cooking.”

Infinitives are often used when actions are unreal, abstract, or future: “He wants to swim.”

Some verbs that must be followed by a gerund:

I don’t mind picking up the kids from school.

I understand putting a gerund after the verbs above is necessary.

These are a few verbs that can be followed by either a gerund or infinitive without a change in meaning:

I will continue taking photography classes next year.

I will continue to take photography classes next year.

Lastly, we have a very small selection of verbs where either a gerund or infinitive can follow a verb, with a change in meaning:

I regret telling you. (I wish I hadn’t told you that I lost my job)

Samina forgot putting the oven on. (Samina did put the oven on, and the forgot about it!)

Of course, in real life, we don’t have time to start considering the grammatical structure of a sentence before speaking. The only way that you will master when to use a gerund is by practising as much as possible.

Insert a gerund or an infinitive in each sentence:

What do you think is the difference between these two sentences?

I tried putting more flour in the mixture.

I tried to put more flour in the mixture.

Leave your answer in the comments section!